In 1894 South Australia became the first jurisdiction in the world to allow women the dual right to both vote and stand for election. 2019 marks 125 years since this revolutionary and progressive step was taken by the Parliament of South Australia to welcome women fully into the political sphere.

Many women (and men!) were involved in getting the vote, the tapestry in Parliament House remembers three – Catherine Helen Spence, Mary Lee, and Elizabeth Webb Nicholls. Muriel Matters was just seventeen years old when South Australian MPs extended the franchise to women. The discussion around gender equality and voting rights that dominated pre-Federation South Australia would be continued in the United Kingdom in the early twentieth century, something Muriel was personally involved in when she moved there in 1905.

Muriel was not the only woman impacted by the events that occurred on the floor of South Australian Parliament in 1894. Many Australian women involved in politics to the present day owe their political careers to the pioneering spirit of our colonial women.

Get Involved! Let’s Promote Other Pioneering Women in Politics

The Muriel Matters Society is looking to promote the legacy and work of prominent South Australian women who were active in Australian political history. If you have an historical figure in mind, please contact The Society and we can use this space on the website to promote your person of interest ahead of the 125th Anniversary in 2019. We can upload any information, pictures, hyperlinks, and/or lesson plans you might have on behalf of you personally, or a group you represent. Together we can make sure everyone knows about the importance of voting and of women’s participation in politics more generally. 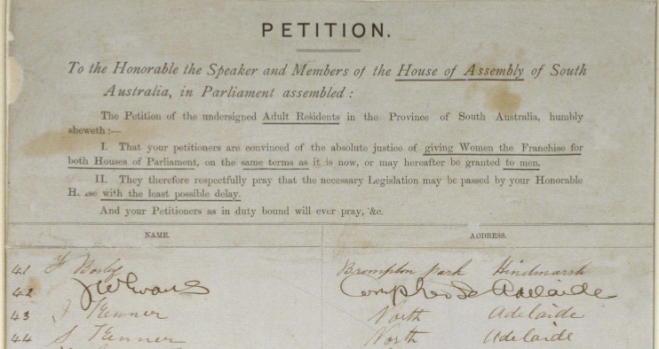