Rarely do we have the opportunity to experience the art and repertoire of Muriel’s time, but July has seen two such occasions.

Photos from ‘A Doll’s House’ 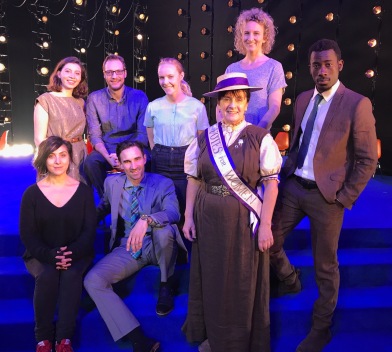 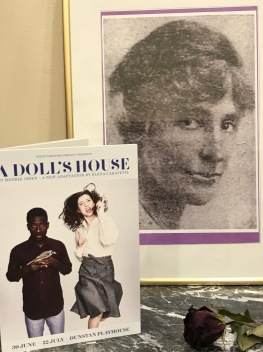 Prior to opening night, Muriel/Frances visited the cast of The State Theatre’s ‘A Doll’s House’ in the Dunstan Playhouse at the Festival Centre. This new adaptation by Elena Carapetis still captures the essence of the Ibsen play that had such a profound effect on Muriel’s life. As Muriel recalled in 1910: “I read Ibsen’s Doll’s House when I was fourteen, and I should never forget my joy in finding that the sentiments I had always vaguely but keenly felt had been put into words; forcible, majestic, dignified.” (The Vote, 19 February 1910) The ensemble cast led by Adelaide born (another Muriel?) Miranda Daughtry as ‘Nora’ and Dale March as ‘Torvald’ in the lead roles, seemed really interested in the Muriel angle (or were terribly polite!) and were presented Society badges.

A small but impressive group of Society members attended the performance on Tuesday 18 July and all really enjoyed the play which was described as a ‘great adaptation’ with ‘great acting’. The set design and lighting contributed to an overall ‘thoroughly enjoyable piece of theatre’. In other words, everyone loved it!

The next State Theatre production will be Macbeth: http://statetheatrecompany.com.au/shows/macbeth/

A Photo of the Set of ‘Enoch Arden’ 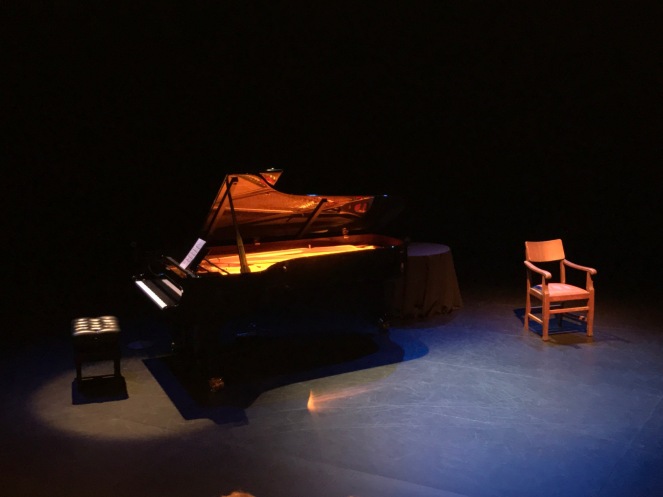 Muriel declaimed many great literary pieces, none more so than Tennyson’s ‘Enoch Arden’, an epic tale of love, loss and sacrifice. First published in 1864, Strauss wrote a piano score for it in 1897. Interestingly Muriel performed this piece by heart many times. Here are two accounts from The Register and The Advertiser:

“A most classical exposition of modern music was given by Mr. Bryceson Treharne at the Elder Hall on Thursday Evening. There was a large attendance. The program opened with Tennyson’s ‘Enoch Arden’. The text of which was declaimed in a sympathetic manner by Miss Muriel Matters. The young lady is artistic to the finger tips, and her part of the program was warmly appreciated by the audience. Mr. Treharne rendered Richard Strauss’s pianoforte setting to the piece – a gem of composition – and he demonstrated his complete mastery over the instrument.” (The Register, 31 October 1902)

“The success of Mr. Bryceson Treharne’s concert on Thursday evening was mainly due to Miss Muriel Matters, who touched the heart of her audience by her recital of the pitiful story of ‘Enoch Arden’. The pathos and sadness of the poem were beautifully expressed by Miss Matters. Mr. Treharne played Strauss accompaniment to the poem. It is a question whether the piano adds much to the effectiveness of the poem, but it served the purpose of giving Miss Matters an occasional rest, it must have been welcome in so taxing an effort. At the conclusion of her recitation Miss Matters was presented with choice bouquets.” (The Advertiser, 31 October 1902)

Muriel Matters was accompanied by Bryceson Treharne. Bryceson was the Erard Scholar at the Royal College of Music from 1893 and came to teach piano in the early days of Adelaide University’s Elder Conservatorium in 1900. An acknowledged virtuoso, Bryceson helped found The Adelaide Repertory Theatre (the oldest in Australia?), gave Muriel piano lessons – and they were engaged for a period around 1912!

The West Australian gives an insight into a latter day performance by Muriel in 1922:

“It is some fifteen years since Miss Muriel Matters (now Mrs. Porter), who arrived by the R.M.S. Ormende on Thursday last first charmed Perth audiences with her recitations, from Robert Browning, Walt Whitman, Tennyson and other great writers, and those who were privileged to hear her recite the whole of Enoch Arden will remember a feat of memory and artistic skill that was quite remarkable in a girl of her years.” (West Australian, 9 June 1922)

This century’s Adelaide performance, in The Space at the Festival Centre, was narrated by National Treasure John Bell (of Bell’s Shakespeare fame, among other things) with internationally acclaimed pianist Simon Tedeschi accompanying.

A CD of the performance is available through Simon’s web page: http://www.simontedeschi.com/cd-shop/enoch-arden-john-bell-and-simon-tedeschi/

What a wonderful glimpse into Muriel’s artistic world…